Noticing the symptoms of ailments affecting your dog can be tricky, even if it’s something as simple as a fever. If your dog has a high temperature, it’s usually just because they’ve been active. There are a number of other symptoms you might notice, though, if your dog does have a fever. But what are those symptoms, and what would cause a dog to get a fever in the first place? Read on for the answers to both of these questions and more.

What Causes A Dog To Get A Fever?

The majority of fevers in dogs are caused by either an immune or an inflammatory response. When it comes to exact causes, it can vary. It may be an infection, which can occur when a dog is exposed to harmful bacteria.

There are a number of infections that could cause a fever in dogs: ear infections, viral infections, UTIs, diseases borne from ticks, or infections of the dog’s internal organs.

Another cause could be neoplastic, which can result in the growth of either malignant or benign tumors. Fever is a common symptom of cancer, particularly lymphoma or leukemia.

It could also be an immune mediated cause, which refers to when the dog’s immune system has become compromised, which would lead to an immune response.

There are a number of things that can indicate that a dog has a fever. In a moment we’ll break these down in detail.

Get To Know The Normal Temperature For Your Dog

When you suspect that your dog has a fever, it’s going to be hard to make any conclusions from their temperature if you don’t know what their normal temperature is, when they’re healthy.

The normal temperature can differ depending on the breed, but the average temperature is between 100.4 to 102.5 degrees F.

So, how do you work out what your dog’s normal temperature is? To do this, you’ll need to take their temperature with a rectal thermometer (when they’re feeling well, of course). 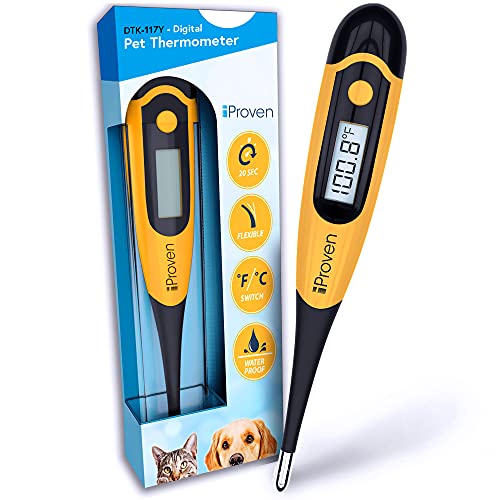 If you’d rather not, you can always just wait until your next routine checkup at the vet.

If you’re taking your dog’s temperature yourself, it’s important that you make sure they remain calm throughout the process. You can do this by feeding them treats throughout, or by having someone else gently hold them still.

If you later suspect your dog of having a fever, you’ll be able to take their temperature in the same way, and compare this temperature to their normal temperature.

It’s worth noting that the temperature of your dog will vary throughout any given day. For example, they’ll tend to go up a little during the night.

It can also be beneficial to keep track of your dog’s normal respiratory rate, pulse, and capillary refill time. Having all this information on hand should make it easier to detect when your dog is unwell.

How To Tell If Your Dog Has A Fever: Symptoms

The temperature that tends to indicate a fever in dogs is at least 103 degrees Fahrenheit. If you don’t have a rectal thermometer, there are other ways to find out the temperature of your dog.

While they won’t be as accurate as knowing the exact temperature, they should still give you a good indication of a fever.

You can take your dog’s temperature by feeling their ears and their paws. Normally, a dog’s ears and paws should feel just a little warmer than your hands.

If they feel more than slightly warmer, your dog may have a fever.

You can also check the dog’s nose for signs of green or yellow discharge.

This can be a symptom of an infection, which would also be causing the dog’s fever. Get in touch with a vet as soon as you can if you suspect that your dog has an infection.

The dog’s gums can also be an indicator of a fever. If your dog is sufficiently calm, open their mouth gently with two hands.

If their gums look dry or feel warm, and if they’re redder than they usually look, it may mean your dog has a fever.

The final way you can check your dog’s temperature without using a rectal thermometer is by checking their groin and their armpits.

Lay your dog on their back and gently feel their groin area and their armpits. If they feel hot, swollen, or both, this is also a symptom of a fever.

If a dog has a fever, it’s common for them to exhibit symptoms like panting, lethargy, or shivering. Often fevers are caused illnesses, in which case your dog may also be experiencing coughing, diarrhea, or vomiting.

You might also notice that they’re drinking more than they usually do – but even dogs with fevers often eat their food as they normally would.

Conclusion: How to Tell if a Dog has a Fever

The best way to tell whether your dog has a fever or not is by taking their temperature. This can be done with a rectal thermometer, or by checking their nose, mouth, groin & armpits, and ears & paws.

Other symptoms include panting, lethargy, and shivering, and if your dog has a fever caused by an illness, they may also be experiencing diarrhea, vomiting, and coughing.

If you do suspect your dog of having a fever, consult with a vet immediately. There’s no reason to be worried, but it could be a sign of a number of illnesses.

Can I get worms from letting my cat sleep in my bed?

Whipworms in Dogs: Treatment and Prevention

Why Does My Dog Keep Yelping in Pain Randomly?

How Much Benadryl Can I Give My Dog?